If you have been searching up about this alluring interior design, you’ll find a common award-winning American TV show that kept appearing in your search as well. It is arguably influential in the spread of the Mid Century Modern design.

Through the seven seasons of the show, it greatly portrayed the interior design during the 60’s-70’s. The picture below is the famous home setting of the main character – Donald Draper.

Is Mad Men still relevant after the last episode in 2015?

You don’t call something an icon otherwise. And also, you can catch Mad Men on Netflix.

The Mid Century Modern, or MCM in short, is a streamlined interior that is highly likened for it’s clean and simple lines coupled with well designed, vintage curvy furnishings. It stays fresh while having pops of individualistic retro identity.

Mad Men may have been said to portray the mid century modern homes and styles of the 60’s to 70’s but they first came to existence much earlier than that.

Strongly rooted from the 19th century and post world war I era. People wanted a sense of modernism and better quality of life. Things that looked stylish but yet practical – affordable practicality.

It was argued to be heavily influenced by the Scandinavian interior design too, which is why the two sound closely alike by definition.

It was said that the style died down in the 60s. However, like fashion, the MCM style went straight back to trend thanks to events and strong enthusiasts/influencers of the time. There are plenty of designers to credit to but I’ll just highlight two of the famous designers whose art is still recognisably used, replicated and loved till today.

If you know what an egg chair is, then you probably should know the designer who came up with it. Arne Jacobsen’s design stays alive and never forgotten. 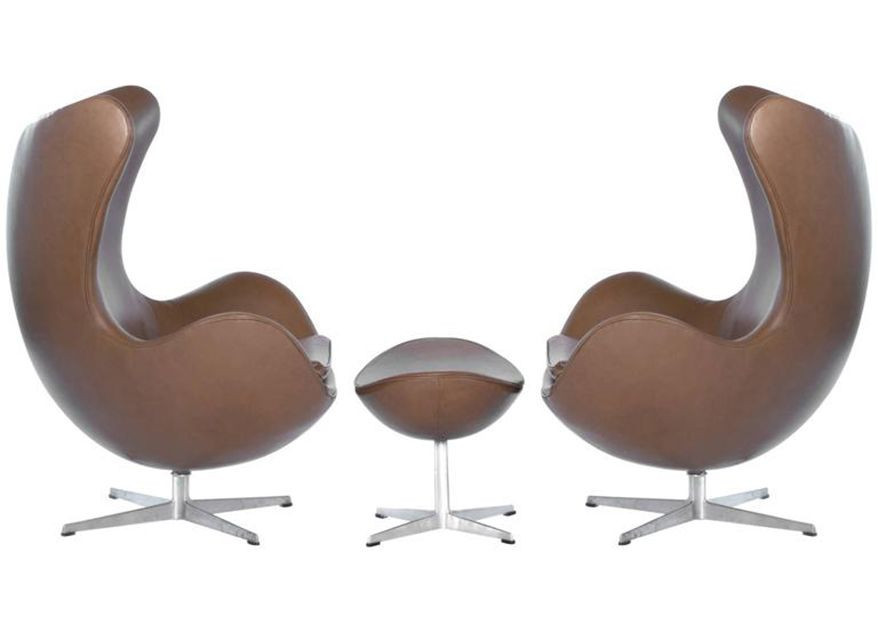 Arne Jacobsen was one of the well known Danish designers of the time. Although the  egg chair was earlier designed in 1958, it was only vastly made known when being used to furnish the SAS Royal Copenhagen Hotel in 1960.

Another name worth is the beautifully odd-shaped Noguchi table. It was first introduced by Herman Miller in 1948, designed by an American-Japanese man Isamu Noguchi. The idea? Again, aesthetically pleasing looking furniture.

The first of its kind was the Noguchi coffee table that was cleverly engineered to hold up a glass tabletop with confident stability. The structure remains iconic – thin base, large top.

Coming back to today’s time, the sheer elegance and simplicity of it has made it a popular office interior design. The mid century modern design is a seamless add to our current contemporary and modern homes. 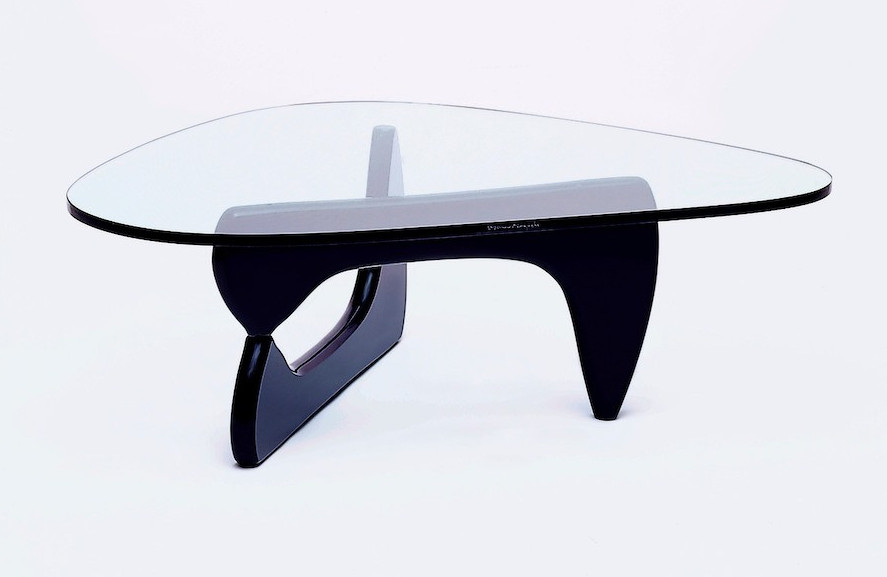 One of the essence of mid century modern design is, well, vintage pieces.

Vintage pieces are often priced exorbitantly high, with people willing to pay thousands of dollars to have them.

Think about the clothing brand, Fila. They were once the brand that was invisible to many but has spiked tremendously, by staying strong to their 90’s vibe. They jumped from average consumer price to a $250 jacket.

Influencers and brand collaborations had a hand in it’s revival. Much like the MCM interior style.

So yes, people do pay to relieve back some parts from the past. And the good news is: now you don’t have to spend $20,000 on a collector’s cabinet made in 1965.

Furniture companies got the message. And they too, are making vintage looking furnishings. High priced that guarantees exquisite quality, at least they hurt the wallet less than a collectors’ piece. 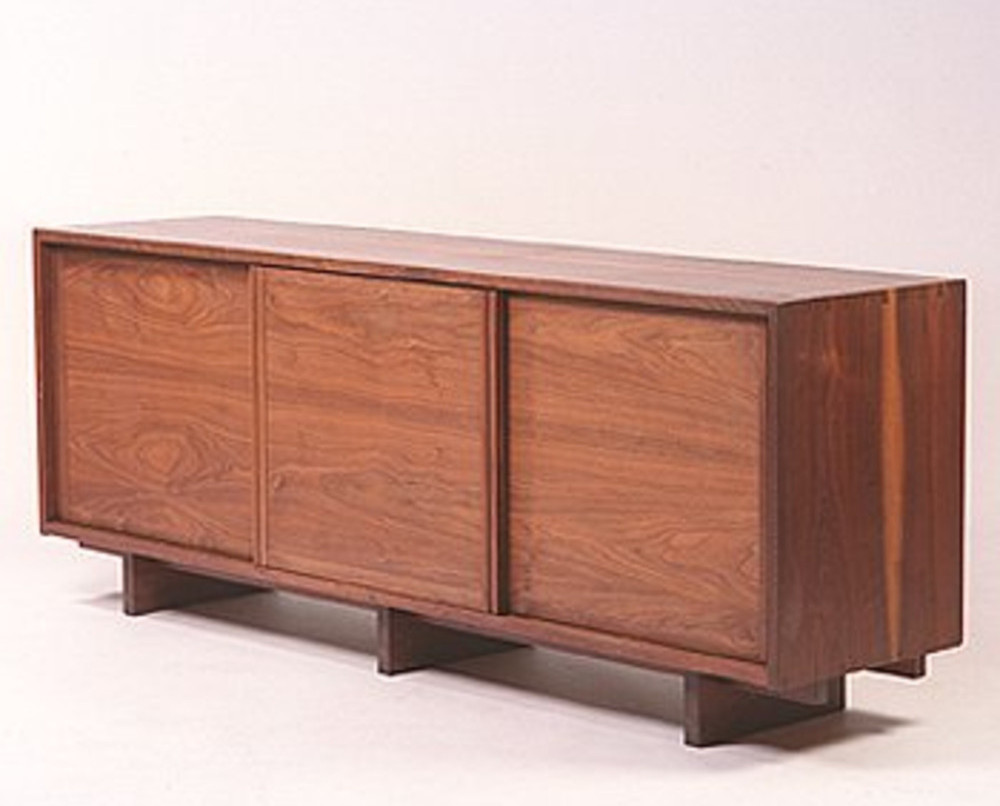 Keep your options open and head down to flea markets and secondhand shops. You might just find a rare piece of vintage treasure to bring back.

In short, while you can find vintage wonders in flea shops or hand me downs, you should also anticipate a possibly higher expenditure when designing a mid century modern home.

The mid century modern design is defined by clean lines, minimal furnishings and emphasise on practicality. That sounds a whole lot like the Scandinavian.

They both have their timeless appeal. However, what sets MCM uniquely apart is the factor of familiarity. Evoking the essence of nostalgia.

Especially for the older generation who may be fine with the newer, modern designs but would love to see some mid century aesthetics that they grew up to. Not entirely, just that little connection to their younger days.

For the younger generation who had never lived those times, I feel it’s truly an appreciation of art and the past.

The kind feeling we get when we enter a well-designed vintage cafe accompanied by jazz music. We imagine ourselves in that era. We immerse ourselves in the environment. We evoke our own versions and imaginations of nostalgia.

It is truly an interior design style unlike any other.

A statement piece of the MCM comes in many ways, purposely designed to draw your attention to it. It can be in the form of: 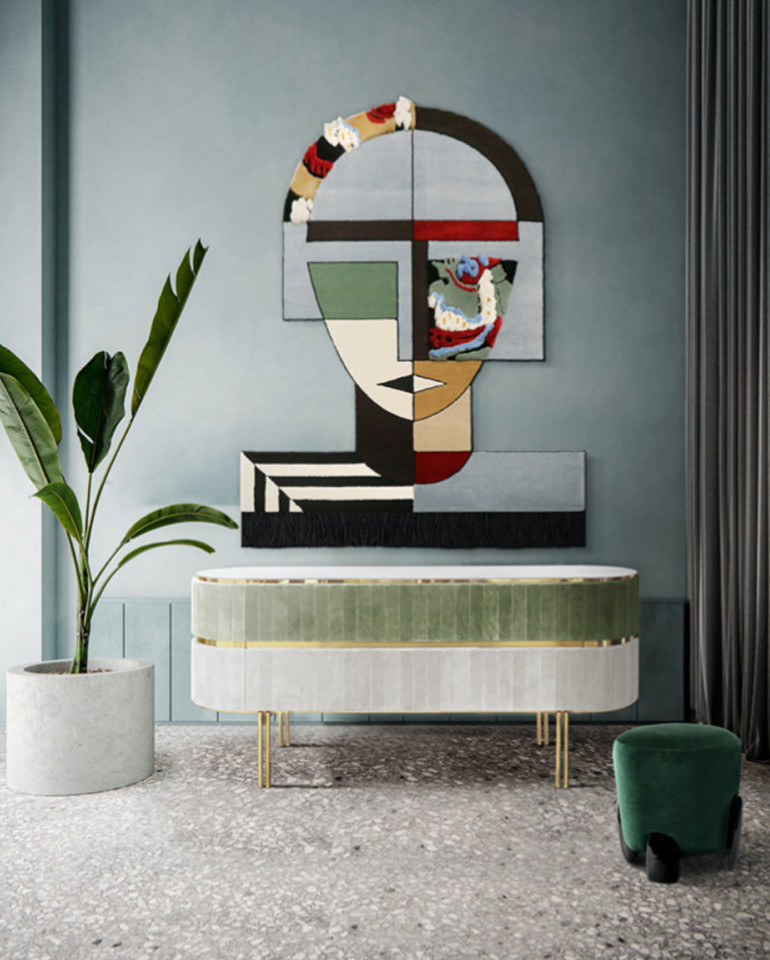 A thing you’ll never miss in an MCM styled home is the combined usage of both straight and curved furniture and accessories. They make the room wholesome, gentle and elegant. Their structure makes them uniquely timeless. For example, the swivel chairs and egg chairs. These are classic signature pieces of the mid century modern home.

Stick around to the bottom to see my recommended egg chair that would definitely be the show stealer whether it be your living room or your home office.

The MCM interior design appreciates anything organic. Materials wise, it’s a variation of wood, metal, vinyl and lots of glass. It underlines the harmonious use of natural elements.

Like the Scandi design, mid century modern homes often have large windows that allow the natural lights and the connectivity to the outdoors. 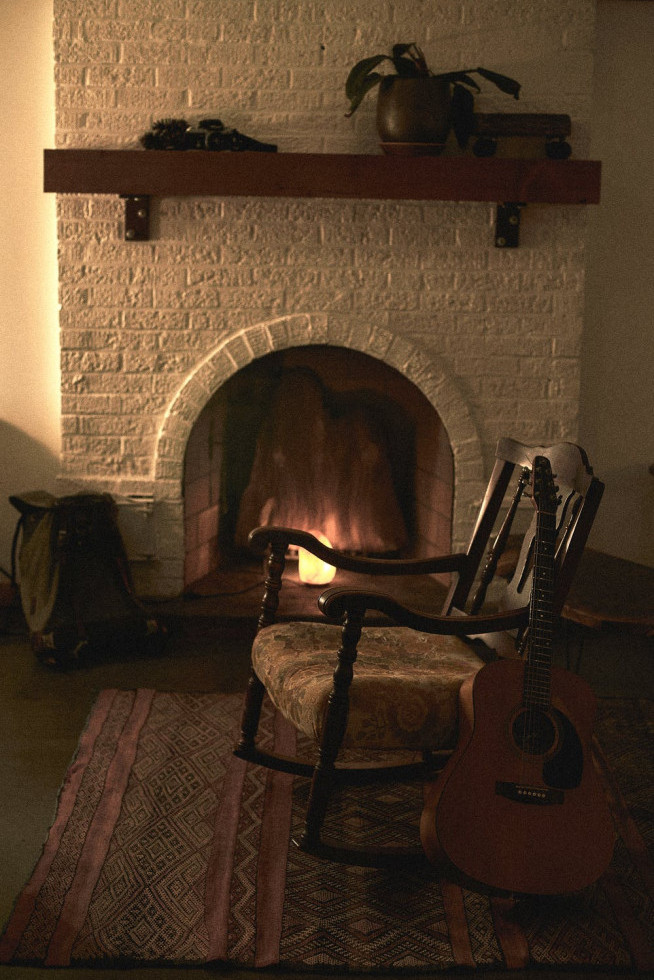 Inside, their furnishings are of velvet, lacquered or leather. It’s a beautiful mix of textures. Wood is of course essential – be it on the walls, floors, ceilings orand one other texture would be flagstones.

Flagstones are also commonly spotted in older mid century modern homes. Placed against the fireplace, flagstones complement the fireplace perfectly to draw a warm, beautiful MCM home. The look is also further elevated by the presence of wood and velvet. A class work.

When we speak about colours, the mid century modern colour palette are mostly calming pastels with bursts of vibrant hues played.

Earthy and a total classic mid century modern color palette combination. Brown and orange are hues of wood. Their introduction would heighten the natural colors of wood – in a balanced manner. In a situation where one feels that there will be too much boldness of bright orange, she can pare it down with dark colored wood or dark colored brown walls. Their warmness, when combined well makes an MCM home a rather inviting place to be.

What is chartreuse? Think of fluorescent lemon-lime. Think 7-up and sprite. It’s bright and spunky, an instant dash of chic to one’s mid century modern decor. When brought together with angled ceilings and graphic art, this chartreuse-grey MCM home will somewhat give out an eclectic decor vibe. 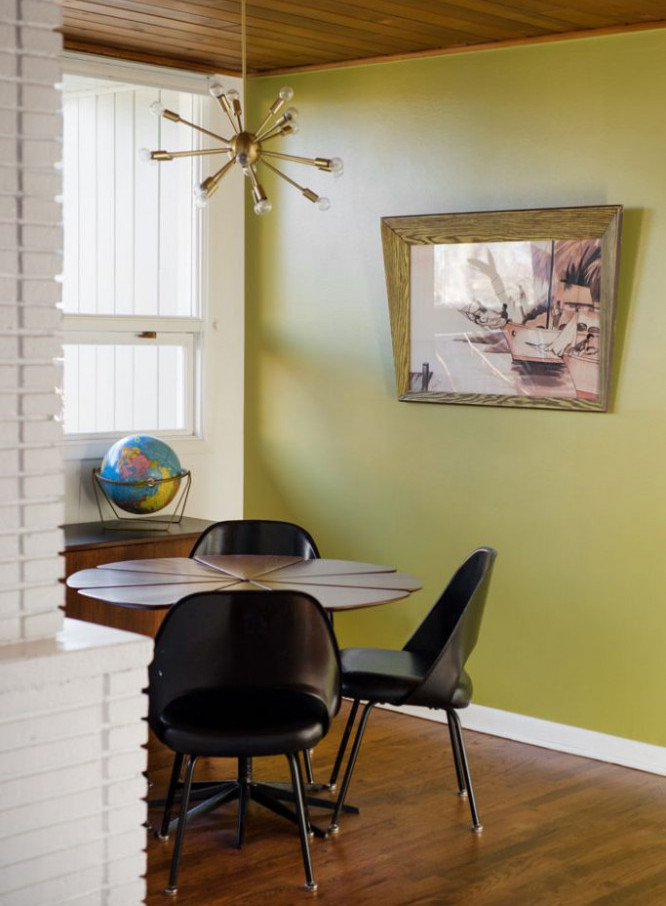 There is just something about teal that makes it feel like a mature, rich and sophisticated colour. Simply throwing in small sofa pillows in teal color adds a visual appeal to your mid century modern decor. It’s the shades of teal, along with wood accents that makes it such a joy to look at.

This combination pairs extremely well with gilded finishes and round shaped home accessories to complete the classy MCM style. 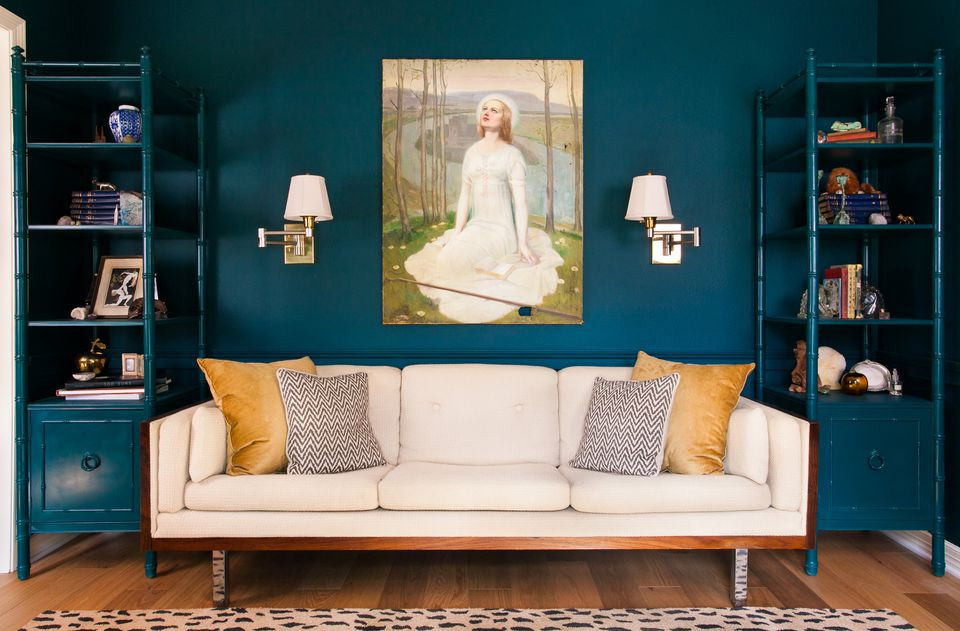 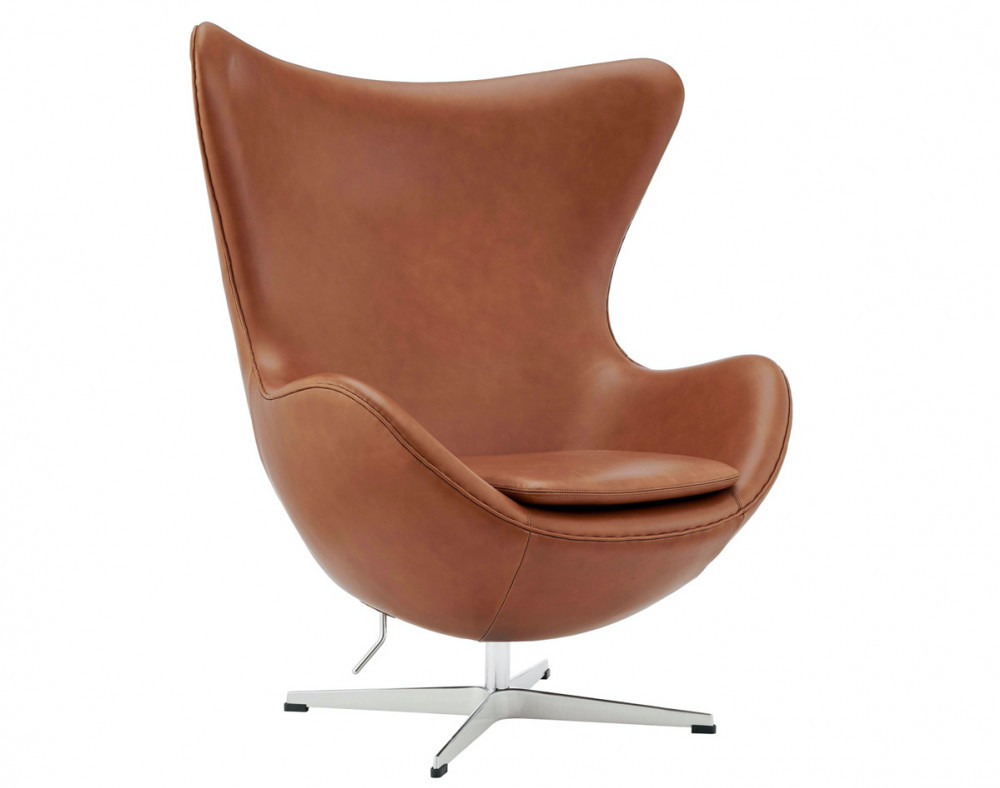 The pre-order egg chair from Eternity Modern comes in 9 different materials to select from. In short, they are custom made to be uniquely yours! 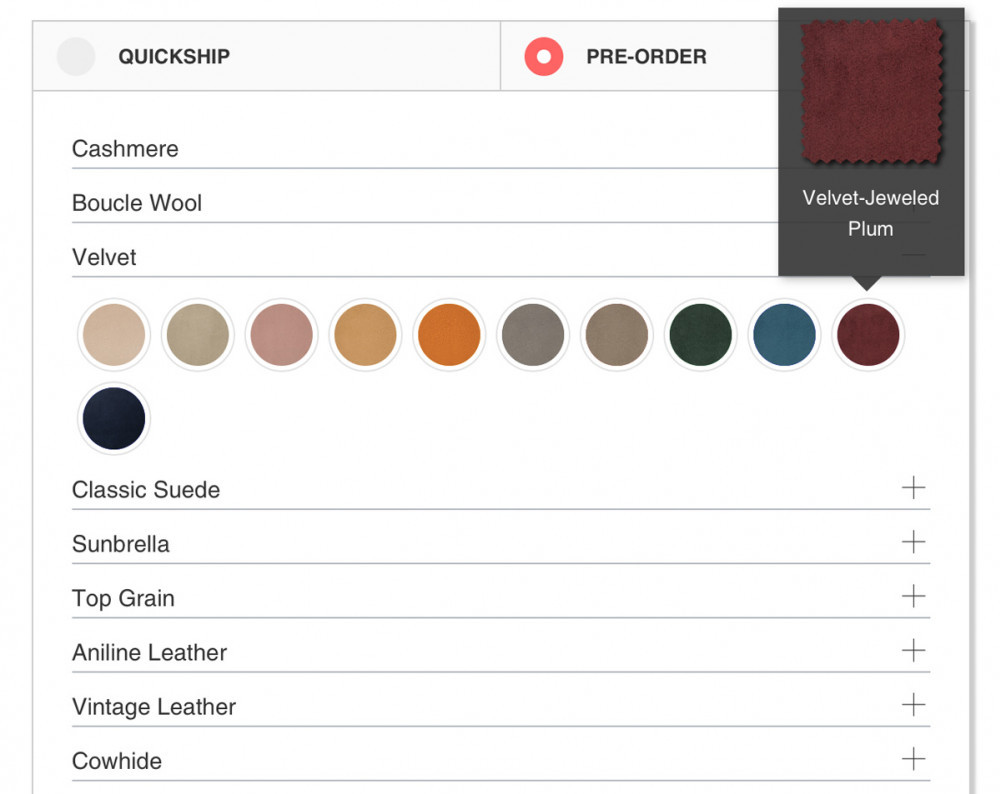 Formed with fiberglass shell and highly resilient urethane foam to create a firm yet pleasant padding around the entire chair. This chair also is designed with an adjustable tilt feature and of course, a 360 degree swivel.

With 13 years of experience under their belt, the majority of customer reviews for the egg chair is a full 5 out of 5, ranking well for comfort and quality. 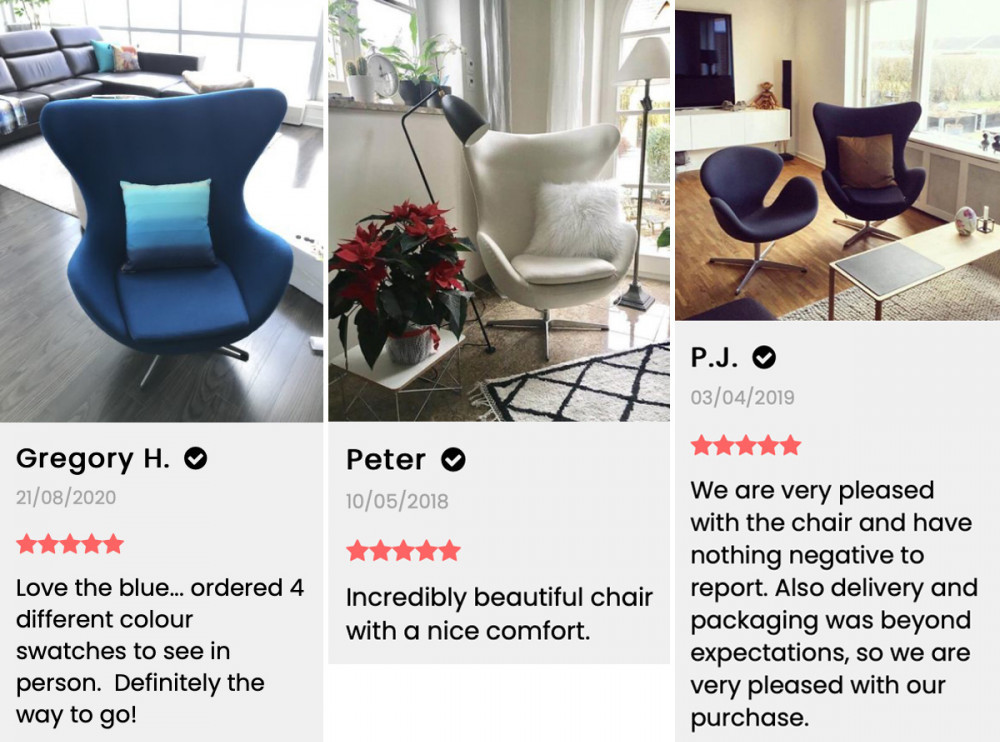 MAKE IT SIMPLE BUT SIGNIFICANT

You guessed it, it’s a Don Draper quote.

The Mid Century Modern is about the simple air of luxury that definitively represents you. That Mod look with a dash of casual vintage vibe to make it feel homely and lounge-ready. Comfortable.

It is about the creative play of textured layers and practical sculpture that could be used as a sofa, a chair or a table. Bask in the functional art of a Mid Century Modern home and you’ll never get bored.

** Disclosure: Some links in this article are affiliate links, which allows me to earn a commission if you click through and make a purchase. There are no additional costs to you.

12 thoughts on “What is Mid Century Modern Interior Design?”